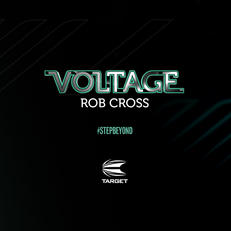 LISTEN: Post-game interview with Rob 'Voltage' Cross
Podcast | "I probably had to win the remaining games and put some pressure on every week [to finish top of the table]" - Rob Cross

Target's Rob Cross could not knock Michael van Gerwen off the top of the Premier League table, after escaping with a draw against Gerwyn Price in Birmingham.

Night 13 of the tournament saw "Voltage" start slowly in his clash with Grand Slam Champion Price, but some excellent doubling (including checkouts of 120 and 108) saw him keep within touching distance.

The world number two upped his game as the match progressed, pushing his average up to 97.81 with a 58% success on doubles, but he still had to survive four match darts from the Welshman before the tie finished 7-7.

"I probably had to win the remaining games and put some pressure on every week [to finish top of the table]" said Cross, "but to get a point out of it isn't that bad with the class that you're playing.

"You miss four darts, and I've been there myself in floor tournaments, it creates problems. I'm really happy with a point but Gezzy will be disappointed."

Rob maintains his position in second behind league leader van Gerwen, ahead of the 14th night of action in Manchester next Thursday, where Cross goes up against Michael Smith.

Prior to that though sees the fourth European Tour event of the year take place this weekend, with "Voltage" lining-up for #TeamTarget in Saarbrucken, Germany, alongside other Target players such as Dave Chisnall, Adrian Lewis, Stephen Bunting and Nathan Aspinall.

You can follow the action live on PDC TV and via various bookmakers' websites worldwide, starting on Friday afternoon and continuing until Sunday night.